What today is known as Main Street through the center of the town of Marlton originated as a trail used by Native Americans to travel to the Atlantic Ocean. Swedish and Dutch settlers came to New Jersey in the early 1600’s and may have walked along that trail, but it was at the end of that century when the English began to buy land for farms and to build homes. William Evans was the first white man to settle in Evesham in 1701 and others soon followed. The trail through the woods was gradually widened to accommodate horses and wagons and became known as The Great Road.

The Evans family built a number of homesteads along the road just east of what is now the town of Marlton, but it is believed that in 1758 John Inskeep (Inskip) the third built the first store in what is now town. His property bordered the Great Road where it intersected with The Old Road (now Locust Avenue). He recognized that as farmland was divided for second and third generations and the population of the area increased there was a need for shared supplies and services. He sold food, dry goods, farm equipment, tobacco, rum and even provided a tooth pulling service. In 1780 John and Rachel Hammitt purchased a piece of property from Inskeep near the same intersection and built a tavern. William Venacomb purchased the tavern in 1803 and by 1813 had added a blacksmith shop, a wheelwright shop and a still house at the location. Tavern keeper, Henry Bennett, was appointed Evesham’s first postmaster in 1808. In 1814 William Swain took over as tavern keeper and postmaster and a year later was replaced by his father Samuel Swain. Samuel renamed the tavern Rising Sun and the small hamlet took on the same name. The intersection of Old Road and Great Road was now a place where settlers came to shop, have equipment repaired, visit with neighbors and send and receive mail. However that was soon to change.

In 1796 a new road was constructed extending the Great Road west to what is now Ellisburg providing Evesham a direct route to Cooper’s Ferry on the Delaware River. Four years later another new road (now Maple Avenue) was constructed from Moorestown south across the Great Road to Borten’s Mill (Kresson). In 1816 Rueben Lewallen purchased eight acres on the northeast corner of the intersection and built another tavern and William Brick  purchased the southeast corner for a  mercantile business, originally operated in a covered arcade with shops on either side. In 1820 Lewallen sold his tavern to Samuel Swain who moved both the post office and the name Rising Sun to the new location. James Mintas, a freed slave and skilled brick maker had owned the southwest corner since 1798 but two years after his death in 1821 his sister Hannah sold the land to Isaac Stokes who built the large federal style store that still stands today. What we now call Main and Maple had become the town center.

By 1830 the village of Rising Sun had two taverns, a post office, two stores, two blacksmith shops, a wheelwright and about a dozen residences. In September of that year a one room schoolhouse was built on South Maple. During the next fifteen years the town experienced a building boom. The majority of structures that today stand along Main, Maple and Locust were built during that time. The growing town needed a name that wasn’t just the name of the local tavern. Zebedee Wills, a prominent resident, and a group of his followers were calling the village “Willsborough” but Postmaster Samuel Swain had other thoughts. He believed that the town should be called Marlton. Marl, a green clay abundant in the northern part of the area, was being dug and sold as fertilizer and had become integral to the economy of the town. In 1837 Swain renamed his tavern/post office “Marlton Inn Tavern” and in 1844 sent a letter and petition to congressman George Sykes requesting the name of the post office be officially changed from Evesham to Marlton. On August 6, 1845 Marlton became the official post office designation.

New Jersey was one of the first states to initiate toll roads as a way to pay for road improvement. In 1849 the state legislature granted a request from Marlton to establish a toll road and the Marlton Turnpike Company was formed. The Great Road from Camden to Pine Grove was improved and renamed Marlton Pike. Five toll booths were set up, two in Evesham Township, one at what we now call Willow Corner and one in Pine Grove where Marlton Pike and Tuckerton Road intersect. That same year Samuel Swain sold his tavern to Joseph Shivers who began the enlargement project that would eventually result in the Bareford Hotel. Lots along Main and several secondary streets continued to be subdivided and by the mid 1870’s more than 70 families called Marlton home.

The town continued to grow and to add services for its increasing population. A brick two room school at the corner of Main and Oak was dedicated in 1878. Two later additions added 10 more classrooms and the building now serves as the administrative offices for the Evesham School District. That same year a town hall was built on Oak next to the school. In1881 the Philadelphia Marlton and Medford Railroad began service along what is now Route 70 with passenger stations at Cropwell and Cooper Streets and a siding for the marl pits, thus providing easy transportation to Philadelphia for passengers and goods. The Marlton Fire Company was organized in 1898 and by 1901 had moved into Marlton’s first fire house (still standing behind the current fire house at 26 East Main Street.) In 1896 Heister Clymer began publication of Marlton’s newspaper, the “Central Record” (still in publication today.) A year later the Marlton Water Company was formed and by December 1897 residents could enjoy drinking water without fear of contamination. In 1903 Marlton Light, Heat and Power Company built a gas house across from the school on Oak Street and installed gas lights along Main. Boys were hired to climb ladders and light the lamps each evening.

By the early 20th Century Marlton was a thriving town with its center at Main and Maple. Now owned by Uzziel Bareford, the hotel was a favorite stop for travelers en route to shore resorts. The property included a shed, harness shop and a public watering trough for horses. At one point there was even a quarter mile race course behind the hotel providing a place to exercise horses and settle bets of who owned the fastest animal. The Brick and Stokes stores provided a wide array of merchandise for both home and farm use. William Zelley operated a drugstore on the northwest corner of the intersection. Downtown also included several blacksmiths and wheelwrights, four doctors, a butcher shop, 2 cabinet makers, a barber shop, a funeral parlor, a tannery, a stockyard, a slaughter house and two churches and numerous private homes.

Although Evesham Township experienced huge growth and development during the second half of the Twentieth Century, the town of Marlton remained very much the same. Businesses and homes sometimes changed ownership or appearance but for the most part the structures built during the 1800’s still stood proudly along Main Street. The major exception was the razing of the Bareford Hotel in 1965 to make way for the 7-11. It is only in the past few years that some of Marlton’s history has been knocked down to be replaced by new apartments and businesses. 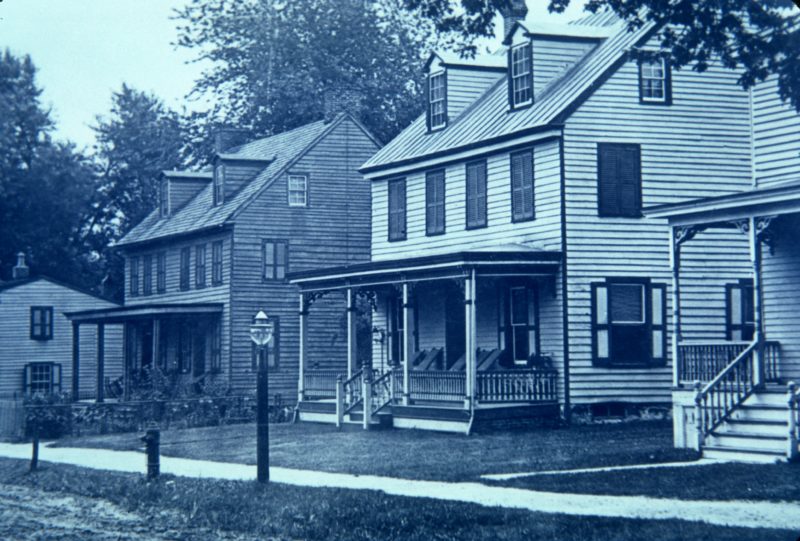